A review copy of Color Monster was provided by Devir Games.  We would like to thank Devir Games for supporting our blog.  All thoughts, comments, and pictures herein are our own.

Sometimes it is really hard to be six.  As an adult, who has not been six for a really long time, I sometimes forget that.  To be six means that most decisions are made for you, from what you eat to what you wear.  To be six means that you fell things very strongly, almost all of the time, and sometimes that can be very confusing.  Sorting through different emotions can be overwhelming and taxing for both the six year old, and all the adult with the misfortune of being near it.

In 2012 Anna Llenas, an author from Barcelona, took a stab at sorting though feelings in her international best seller The Color Monster: A Story About Emotions.  In the book, the Color Monster wakes up in a confused state.  It seems that he is in a jumble of emotions, felling happy and angry, sad and calm, loved and even scared, all at once!  With the help of a young girl he is able to sort through them all by placing them into little jars.  While sorting these emotions he becomes more aware of each one and what they all mean.  It is a simple yet powerful book that helps young children sort through their own feelings.

In 2019 Devir Games introduced a board game based on The Color Monster, called, well, The Color Monster.  Designed by Josep M. Allue and Dani Gomez, with art provided by the author herself, Anna Llenas.  Color Monster is true to the book, taking players on a unique journey through their feelings.

The Color Monster is a cooperative game for 2 to 5 players.  It plays in about 20 minutes, with a recommended age of four and up.  Players take turns moving around the board collecting emotions and helping to sort them into their correct jars.  The players win when all the emotions, love, happiness, fear, anger, sadness, and calm have been properly sorted.  Players lose the game when three mixed up jars are revealed.

Set up is quick and easy.  The game board is set out with a emotion counter placed on the corresponding colored section of the board, color side up.  The Color Monster and Girl are placed together on the pink space.  The eight jars are then mixed up and placed on the two shelves with the drawings on the back side, hidden from the players.  That’s it!

When the Color Monster lands on a spot containing a color token, the player must then share with the other players something that causes them to fell that particular emotion.  For example, if the player landed on a yellow space they would have to share something that makes them happy.  Once they have shared they may choose one of the empty jars on the shelf.  The jar is then flipped over, if the colors match the token can be placed inside.  The jar is then replaced on the shelf showing the sorted emotion.  If the colors do not match the token is returned to the board and the jar is returned to the shelf, color side facing away.  If the revealed jar is a mixture of colors, the Color Monster becomes confused.  First the player must choose two empty jars on the shelf and switch their positions.  Then the mixed jar is replaced, mixed side showing, returning the token to the board.  If three mixed jars are revealed the game ends and the Color Monster remains confused.

As the game progresses players will end on spaces without tokens.  When this happens the player must still share that emotion, but can then roll again.  Whenever the Girl and the Color Monster share the same space she is able to help him relax a bit.  This allows the player to turn one of the mixed jars back around.  Play continues until players either help the Color Monster sort his feelings, or, gulp, fail. 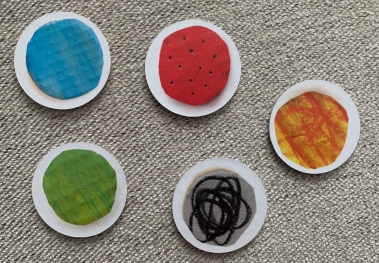 The components are amazing.  The wooden Color Monster and Girl figures are huge and chunky.  Perfect for little hands.  The die is also wooden and chunky.  The tokens, jars, and shelves are made of thick cardboard, and easily can withstand the repeated play of smaller gamers.  The board and pieces are colorful and very true to the story.  It is an excellent adaptation of the original story, extremely thematic and true.

The game play is quick and fun.  I really enjoyed the aspect of sharing feelings.  It is a great way to get people talking.  Through playing I learned some interesting things about my daughter that I never knew before, such as what makes her calm.  Repeated play brings out more and more, and it was a great way for her to see that I have emotions too, and these are the things that trigger them.

There are so many applications for this game, from families to schools.  I think this is a great way to get families, and even friends talking about their feelings.  We originally played this at Dice Tower Con with the awesome Devir staff, and we had a great time.  it was also a great way to get to know people that you may not know well.  The rule book have a few suggestions for parents and professionals included in the back as well.  If you have a young person in you life this is a must have game.

“Hello!  I like Color Monster because it is very good and tells how you’re feeling.  When you move your piece to a different feeling then you gotta tell that feeling and pull a little thing and put it in a jar. There’s different emotions, if it’s all the different emotions mixed together, you don’t want those.  Cuz, three of those make you lose.  It’s a very fun game, and the big chunky characters are cute, and the bottles,and … well, everything about it is just cute.  It’s based on the book The Color Monster, if you’ve ever heard of it.  That’s it!  Bye friends!”

The Color Monster gets a solid:

Did you like what you read here?  Please follow us here, Facebook, and on Twitter to receive the most up to date posting information as well as other related and unrelated posts!  We have also launched a YouTube Channel where Emmy does playthroughs of her favorite games.  Please, feel free to leave a comment below!

A review copy of Orchard was provided by Side Room Games.  We would like to thank Side Room Games for supporting our blog.  All thoughts, comments, and pictures herein are our own.

Planting, growing, and harvesting fruits trees is hard work.  There is a lot of waiting for just the right moment to pick the fruit.  Too soon and it might not be ripe enough.  Too late and it may be over ripe.  Patience is the key to getting a piece of fruit that is just right.  There’s also some degree of strategy, knowing when and where to plant your trees to maximum fruit production.  No, there is nothing easy about planting, growing, and harvesting fruit trees.  That’s why rather than do the actual work, I prefer to play games about it…

In 2018 Mark Tuck designed and illustrated a 9 card game called Orchard.  It was an instant hit, winning the 2018 Golden Geek Best Print & Play Board Game as well as the 2018 9-Card Nanogame Print and Play Design Contest.  Fast forward a year and it is currently on Kickstarter (fully funded) and to be published by Side Room Games.  Orchard is a solitaire game comprised of nine cards, 15 dice, and two black cubes.  The game plays in about 5 minutes, and has the player trying to grow an orchard, by placing cards, that bears the maximum amount of fruit.

In this small box game the player starts by dealing out 9 cards.  The game comes with 18 cards to help with replayability, as well as a multiplayer option.  The first card of the deck is then turned over, this will be your starting orchard.  The player then tales two cards from the deck as their starting hand.  Each turn a player will take three actions.  The first action is placing a card from their hand.  Cards must be placed overlapping at least one existing card. Cards may be rotated in either 180 or 90 degrees in either direction.  Trees must match the card they are overlapping, or your fruit will rot, more on this later.

The second action is placing dice.  For each tree on the just played card that overlaps a matching color either a new die is added (if there was not one already there), or an existing die will be ticked up.  If there was not already a die on the overlapped tree, the player will take a die matching the color of the tree and place it on the tree with the “1” side facing up.  You have just grown one piece of fruit on that tree.  If the tree had a die there already it will be ticked up.  A one becomes a three, a three becomes a six, and a six, well, it stays a six.  If the tree colors do not match a black cube will be placed on the tree.  This fruit has now rotted.  For the rest of the game this tree may not be overlapped, or harvested any further.  This may happen up to twice per game.

The lat action is to draw back up to two cards in hand.  Play continues until all cards have been played.  Scoring then occurs by adding all the values of the dice showing on the cards, subtracting three points for each rotten fruit (black cube) in your orchard.  The rule book has handy little chart in the back that lets you compare your harvest to find out just how fruitful it was. 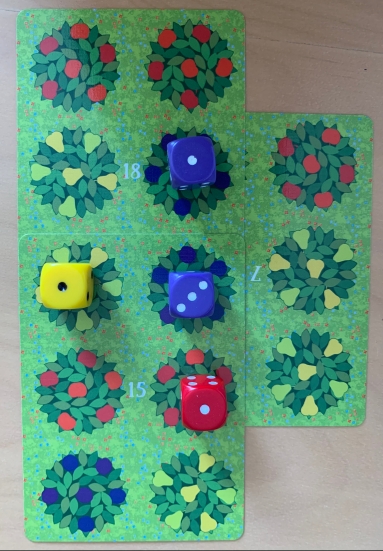 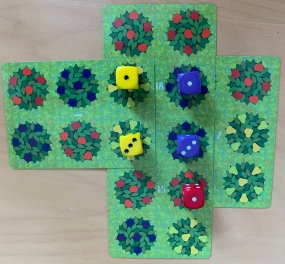 Orchard is a quick game, with endless replayablilty.  It is a great little puzzle that challenges you on every turn to figure out the right way to play your tress to get the most out of the placement.  The footprint is very small.  I have a copy in my backpack, and have played it a few times during lunchtime.  The playtime is perfect for a quick game, but challenging enough that it is satisfying at the same time.  Although Orchard only takes 5 minutes to play, it is a game that you want to play over and over again.  I recently taught Orchard to my 6 year old daughter.  We now have contests to see who can build a better orchard.  It is fast, simple, and completely engaging for young and old.  For me, it is a perfect little game, in a perfect little box, that I will return to again and again.

The copy that I was sent was a prototype, all components shown here are subject to change.  The Kickstarter will also unlock some upgrades not shown here as well.  The game that I played was near perfect, and in my opinion, all upgrades are just icing on the cake! 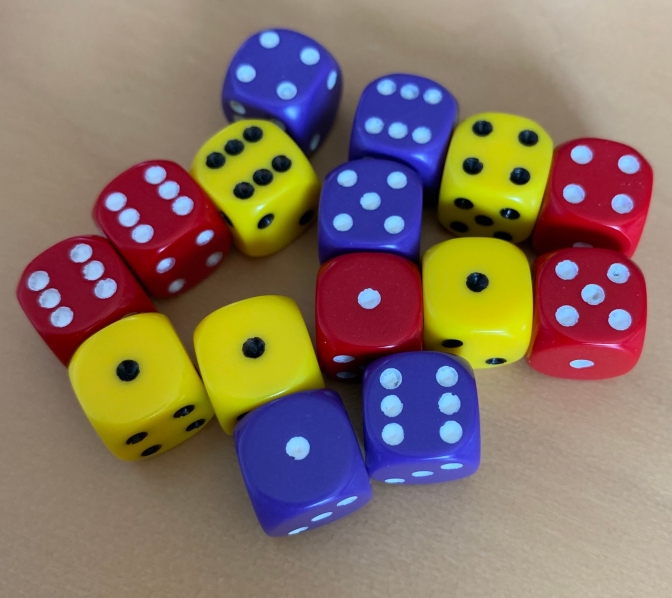 Orchard is live on Kickstarter until September 22, 2019.  If you feel this is something that you may enjoy stop by and give them a little love!  Thanks for joining me this week as I singlehandedly harvested the most fruit!  Join me next time, follow me on Twitter and Facebook, and please, feel free to leave a comment below!