A review copy of Time Breaker was provided by Looney Labs.  We would like to thank Looney Labs for supporting our blog.  All thoughts, comments, and pictures herein are our own.

Like most families, my daughter and I often take trips to the local park after school and on weekends.  She loves to run around, play on the swings, and of course the playground equipment.  Her absolute favorite thing in the world is to play Time Traveler.  She and I climb aboard the jungle gym, which is magically transformed into our time machine.  We then choose different spots in time and travel back to them.  This usually involves a small history lesson from me as we are travelling.  Then we have to, of course, save the day, thereby saving time itself. 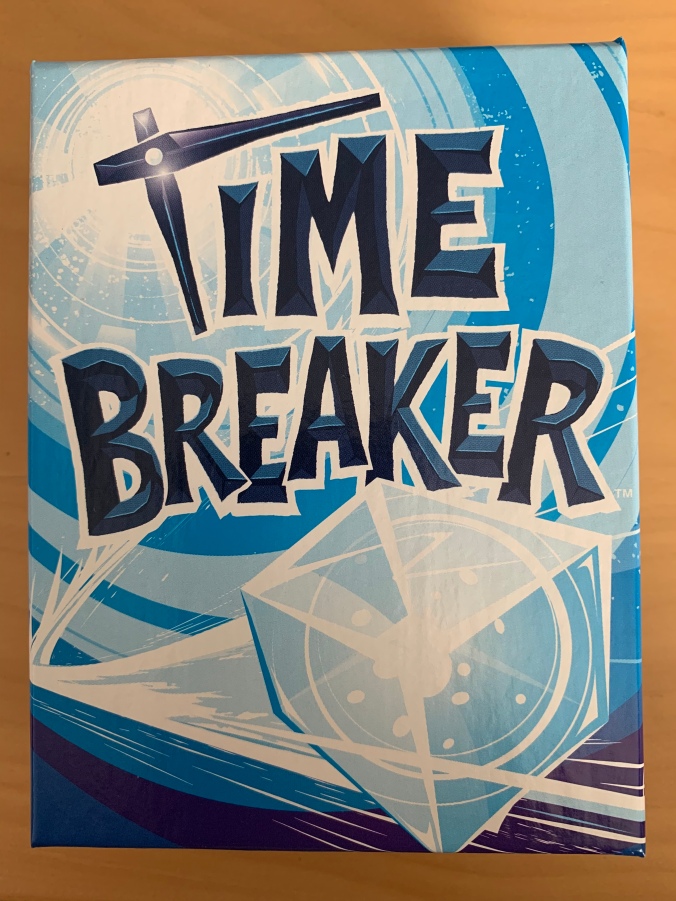 When we both heard about the newest offering from Looney Labs, Time Breaker, it was no surprise that my daughter wanted to get her hands on it.  Time Breaker, designed by Andrew Looney, featuring artwork by Derek Ring, plays 2-5 players in about 15 minutes.  In the game you take on the role of an officer in the security division of the Time Repair Agency (TRA).  It is your job to track down and apprehend a time breaker who is on the loose wrecking havoc on the space-time continuum. 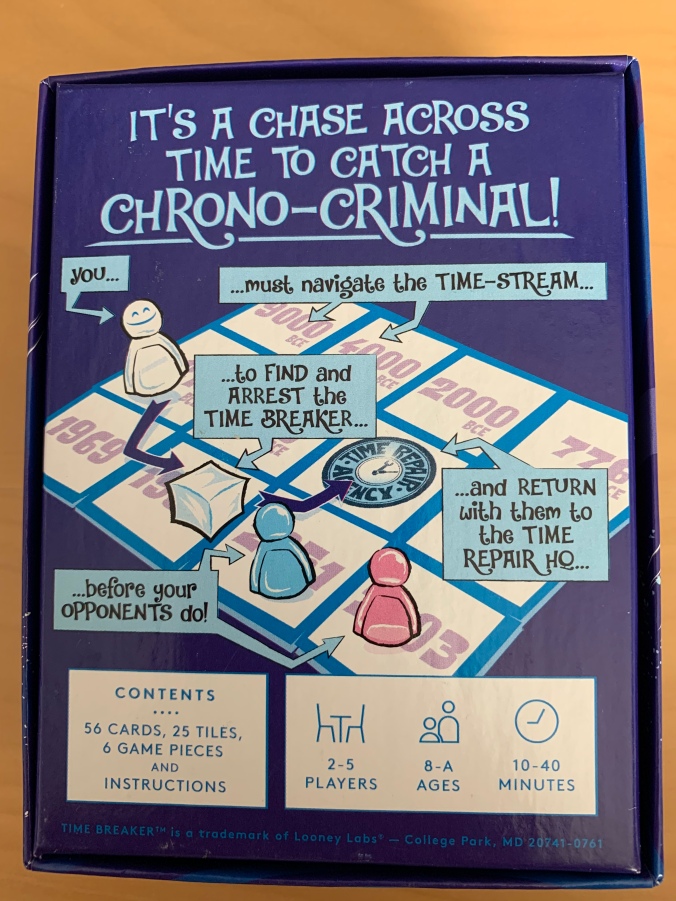 Game is played on a 5 X 5 grid tiles that represent gates into different time locations.  Play begins on the center tile, which represents the TRA headquarters.  The surrounding tiles are places randomly, making each game unique.  Player will maneuver around the board by playing cards from their hands, following the arrows on the tiles, or through wormholes.  Cards come in several different forms.  Move cards allow you to do just that, moving your pawn one tile over dependent on the card.  Some allow lateral movement, while other allow vertical movement.  Jump cards allow you to move your pawn directly to the time tile shown on the card.  Action cards have 8 different effects that can do vastly different things, from moving you directly to HQ (very handy if you have managed to arrest the Time Breaker) to moving other players around the board.  Breaker cards are action cards that have the Time Thief performing actions, such as crashing gates (removing them from the board) or moving the breaker to another tile.  Lastly, the Stop Time card will nullify another player from playing a card. 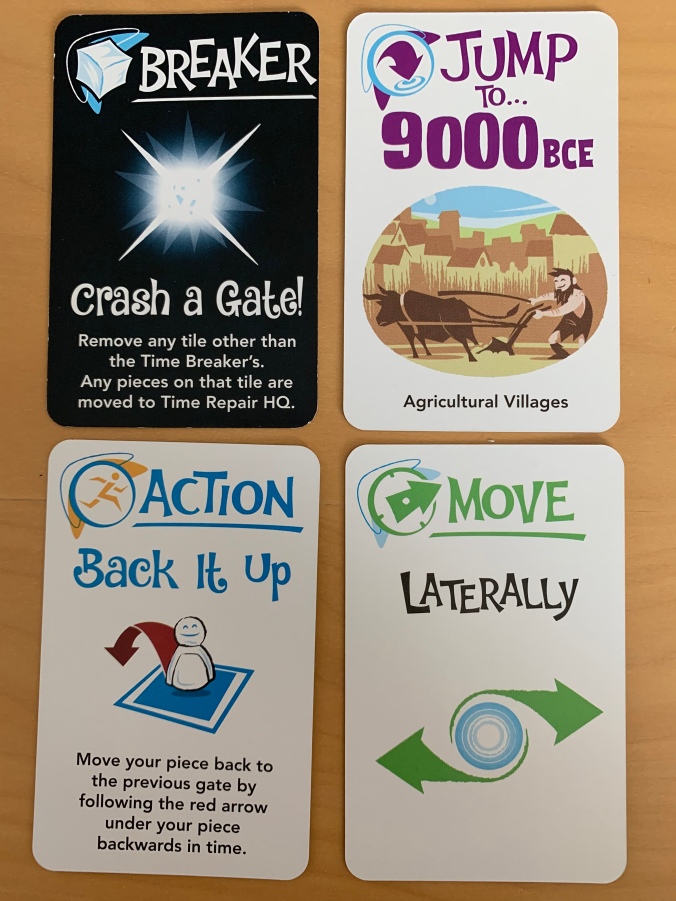 Once the 5 X 5 grid is built the Time Breaker, represented by a clear cube, is placed on the tile in the upper left corner.  Players start on the middle HQ card.  Each player is dealt 3 cards, and play begins.  Each turn players will draw one card and then take an action.  Players may chose, as an action, to play a card from their hand, follow an arrow on a tile, or go through a wormhole.  Playing a card from your hand is as simple as that.  Each tile has a green on the bottom of it and red arrow on the top of it.  As an action a player may choose to follow the green arrow on the tile.  This will take the player to the time tile that follows that tile directly in time.  Choosing a wormhole will have layer draw a new card and immediately play it, regardless if it is beneficial for the player.  Once both of these steps have been taken play moves to the next player. 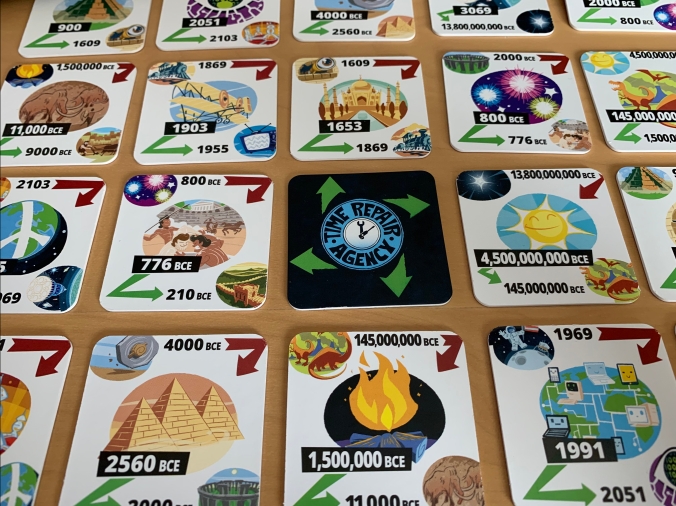 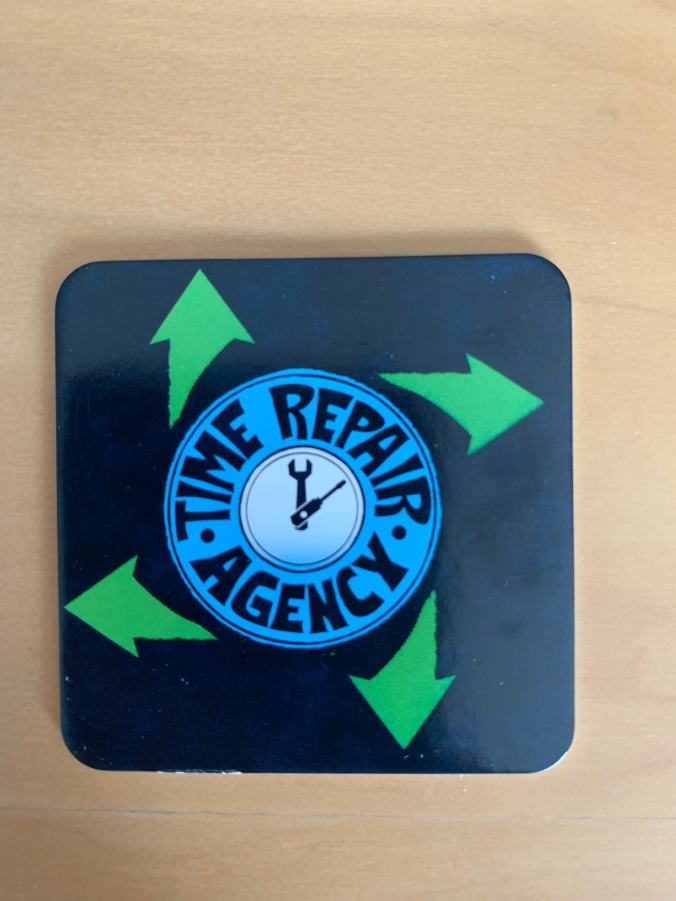 Time Breaker plays very quickly, and is a great addition to any collection.  It has a very small footprint and can be played virtually anywhere the 5 X 5 grid can fit.  The rules are simple to follow and make for teaching the game to new players very easy to do.  The construction of the random 5 X 5 grid makes for a unique experience every game, helping to keep it fresh and replayable.  As you are playing there are a lot of “take that” moments, but they never really feel malicious or mean.  We have spent a lot of time laughing over coming so close to getting a win only to have it slip away at the last minute. 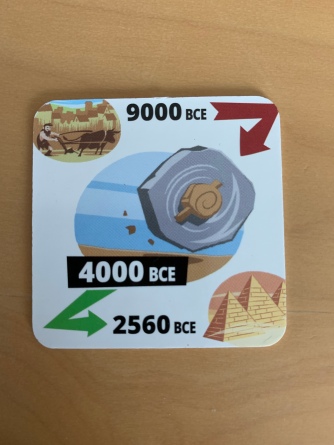 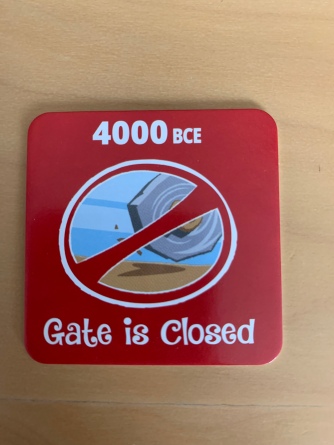 The components are well made.  The time tiles are a thick cardboard and are a compact size, helping to keep the footprint small.  The cards are also well made and have held up nicely to repeated shuffling, although during the game reshuffling is very rarely necessary.  The pawns are bright and colorful, and we really loved the inclusion of different colors other than the standard red, green, blue, yellow.  The small box fits everything and takes up very little space on my shelf.  Best of all, it is made right here in the USA, something Looney Labs is very proud of.  🙂 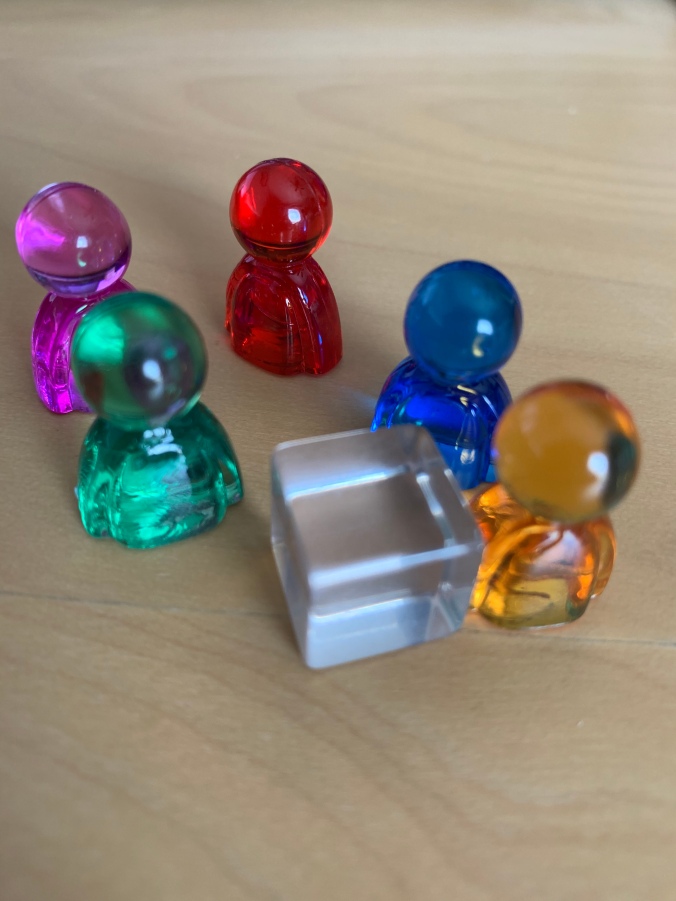 Overall we really enjoyed this game, and although the box recommends ages 8 and up Emmy had little trouble playing this game.  It took he a bit to understand some of the cards, she’s still learning to read, but she caught on pretty quickly.  The flow was quick, and there was very little downtime for Emmy to get distracted and lose interest.  This game has definitely been a win with her, as I am sure she will tell you next!

“I love Time Breaker, it’s a good game.  I would change the rule that one of you has to win, I wish we were working together.  I like there is a pink pawn.  I like Galileo’s telescope.  I really like the tiles and the art, and all the different times.  It’s like an old timey game, it goes back in the time, like in 1901.  The game was really cool!  Bye!!”

Time Breaker gets a solid:

Did you like what you read here?  Please follow us here, Facebook, and on Twitter to receive the most up to date posting information as well as other related and unrelated posts!  We have also launched a YouTube Channel where Emmy does playthroughs of her favorite games.  Please, feel free to leave a comment below!