A preview copy of Rideshare Wars was provided by Zuroovi Games.  We would like to thank Zuroovi Games for supporting our blog.  All thoughts, comments, and pictures herein are our own.

At some point in everyone’s lives they will utilize a rideshare service, be it Uber, Lyft, or the classic yellow taxi cab.  Zuroovi Game puts you in the drivers seat, running your own ridershare corporation.  Think you can “hack” it?  (Pun totally intended) 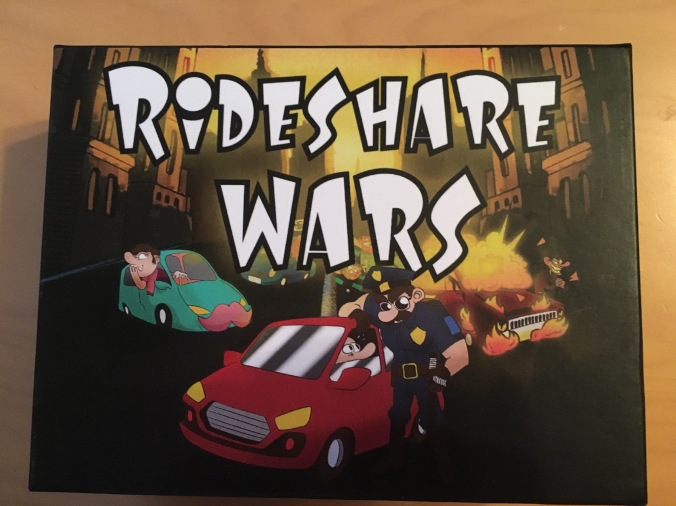 Rideshare Wars, designed by Peter Madara, illustrated by Manuel Berbin, is a unique card game that plays 1-4 players in about 45 minutes.  In Rideshare Wars you are a rideshare corporation battling for the biggest share of the city.  In a unique twist on set collecting you are collecting riders, from different cities as well as zones of these cities.  Getting the most zones will net you a milestone card, as will collecting all the zones in a particular city.  Collecting 6 milestones in a 2 player game will result in an immediate win, so keeping an eye out for these bonuses is extremely important.  If the milestone criteria is not met the game ends at the conclusion of the evening shift, the player with the most points then wins the game.

To begin set up three different rider decks are built based on the number of players, 20 riders in each of three decks for a solo game.  These three decks will represent the morning, afternoon, and evening shifts of your rideshare business.  Four riders will be layed out to begin the game offering a starting pool of fares, descending from the draw deck.  Each player will also start out with seven driver cards, effectively the currency of the game.  The driver cards will be used to pick up on of the fares from the pool, the cost ranging from one to four driver cards.  The card costs will depend on the placement in relation to the draw deck, the card closest to the draw deck being 4 and farthest away 1.  A taxi stand will also be set up, these riders can be acquired as well, just not the traditional way of using driver cards. 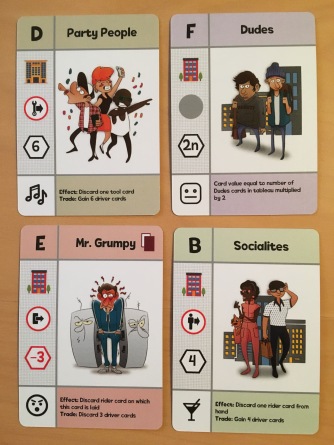 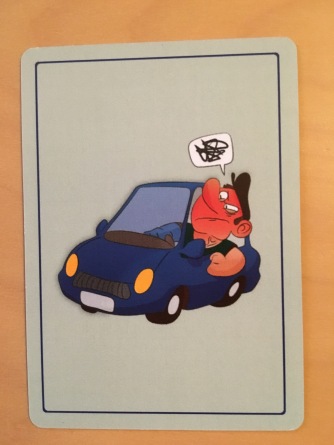 On your turn you will begin by drawing a tool card.  Tool cards can be good or bad for you, and may be played for their effects right away, placed into your hand for later used, or used as payment for an optional action later in the turn.  After drawing a tool card the player may choose to displace a rider, this costs a tool card, and discard the rider from the game.  Next the player will acquire a new rider from the pool paying it’s cost, and adding it to their hand.  The player will then choose a rider from their hand to play into their play area.  They may then choose to activate one or two optional action, .  There are many different optional actions to choose from gaining another tool card, to gaining a rider from the taxi stand.  The player will then check to see if any milestones were achieved, collecting the corresponding card, and finally refiling the rider pool by sliding all cards down and adding a new one to the top.

Rideshare Wars packs a lot into a small box.  There are many different choices to makes, from optional actions to what riders to pick up and when.  The riders also contain different effects that can be beneficial to you, or negative to your opponent.  Some riders can net negative points but give great effects.  Other cards can give you bog points but may not have great effects.  If you run out of driver cards you can gain a loan, gaining three new drivers, however if they are not payed off at the end of the game they will cost you negative four points.  There are times when you will find yourself picking up a rider to stop an opponent from doing so, or because you have no other choice.  This can mess with a plan that you have meticulously been working on, forcing you to reconsider your tactics.

The copy of Rideshare Wars that I received was a prototype, therefore all pictures of the content are subject to change.  With that said, the game presents well.  The cards are well done, colorful, and the artwork is perfect.  The colors pop off of the cards, and the cartoony style really went with the theme, in my humble opinion.  The rulebook is pretty long, and can be a bit intense at first, but with a few plays under your belt things start to fall into place and make sense.  For beginners I recommend leaving out the option actions.  There are a ton of them, and can make the game a bit overwhelming.  The theme is truly unique, one that I have not come across in tabletop yet.  I love the idea of getting behind the wheel, looking for these riders, from the grumpy old guy to the socialites.  The tool cards are great too, sometimes giving a boost at just the right moment, and other times really blowing it all up.  The captions on the tool cards are funny and light, and made me chuckle out loud on more than one occasion.  The game is light, but can be heavier based on all the decisions you have to make.

I recently took Rideshare Wars on vacation with me.  It made it to the table, and we had a great time with it.  The theme was accessible to everyone that was there, gamer, and non-gamer alike.  The basic game play was also accessible to everyone at the table.  We made some minor tweaks to accommodate newer players, like removing some of the optional actions, as I previously mentioned.  That seemed to make the game much easier to them to understand and enjoy.  Overall everyone who played it enjoyed it, and would like to play it again.  A huge compliment from non-gamers!

Rideshare Wars is currently on Kickstarter.  If this sounds like a game that you might enjoy please consider backing it here.  Thanks for joining me this week as I singlehandedly became the best driver!  Join me next time, follow me on Twitter and Facebook, and please, feel free to leave a comment below!