The Forgotten West, a unforgiving and unfortunate place.  A place not many in their right mind would venture.  You are not like many people, you are a Grimslinger, what that means exactly is not really clear to you at first. You wake to find yourself with the ability to manipulate the elements, tasked with the undertaking to track down and find The Witch King.  Are you up for it?  If so, read on… 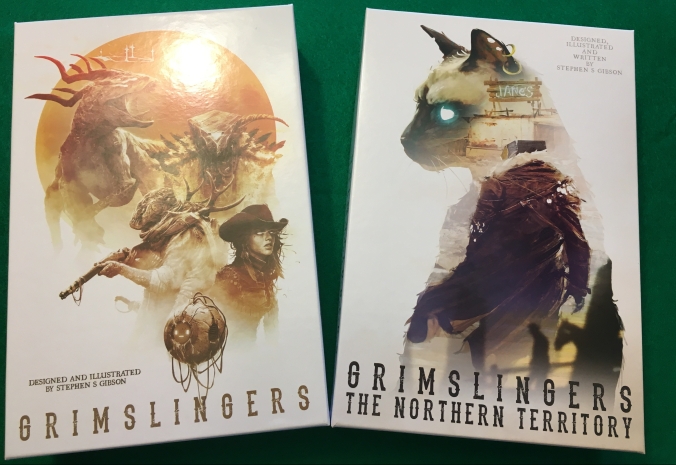 Grimslingers is a sci-fi fantasy deck building card game for 1-6 players, designed by Stephen S. Gibson, and published by Greenbrier Games.  The game can be played in a variety of ways including versus, coop, and solo modes.  The core box also contains a narrative based campaign called The Valley of Death that ideal for the solo player.  This is where the majority of my time has been spent with the game. The Valley of Death can also be played cooperatively with 1-4 players.

The Valley of Death takes you through the story of your Grimslinger, coming to terms with who they now are, and trying to get some answers, as well as find their place in this strange new existence.  The original game, which I have owned for some time now, takes you through the story with the help of a map.  By moving along the map nodes, working towards the objective set for you in the particular chapter you are playing, you will encounter events, the occasional battle, as well as visiting various landmarks.  Events can be good or bad and are determined by an event deck.  There is usually a choice to be made or a D6 to roll to determine the outcome.  The landmarks are different places in the Forgotten West that may offer you an opportunity to heal, gain items, or offer other helpful services.  The newer version, as well as the expansion, The Northern Territory, using a different map system.  The new system uses a deck of cards, ensuring that every playthrough is different.  Whereas before you were able to choose your path to either avoid or encounter more enemies, the new map makes it all random depending on the card that is revealed when you traverse onto it. 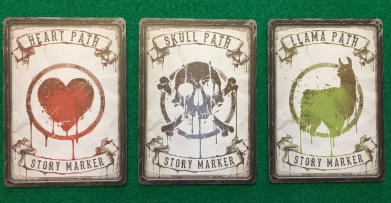 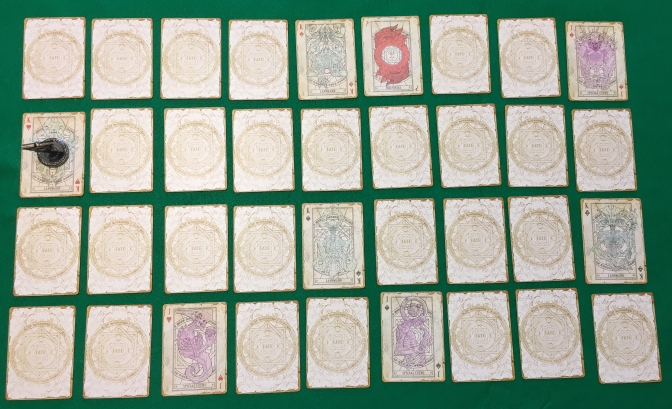 As I mentioned, Grimslingers The Valley of Death, and The Child of Light campaign from The Northern Territory, takes place through chapters.  The chapters are short narratives that set up the mission at hand as well as the requirements to the next part of the story.  These requirements may be travelling from one area to another, collecting an item or items, or beating a certain bad guy.  Each part of the story will have its own map setup, as well as list of enemies that you will encounter.  Unless otherwise told you will roll a D6 to see which group of bad guys you will encounter.  The enemies might be a Dune Wurm, Bandits, Specters, Soul Hunters, Wisps, or Magic Mushrooms.  Each groups contains its own creature deck that gets mashed together with a general creature deck to build their hand.  You are equipped with basic spells that can be played, you will earn more through experience points, as well as gaining powerful items.  Hand limits can be hard in the beginning, so can stash limits (the amount of cards you can have in reserve), making for some tough choices.

Battles are straightforward, you play a card from your hand, the creature plays one from theirs.  The card with the lower resolution number activates their attack first.  Play continues back and forth this way until someone falls.  Added to the battle are creature modifiers that may help or hinder the beast as well as dispositions, bonuses that more often than not, help to level the playing field, in your favor.  There are some tough battles, especially in the later parts of the story, but for the most part the game is not going to kill you too much.  Each of the Grimslingers in the game has its own personal deck that they can combine with the basic spells to customize the experience.  This customization helps with replayability as you learn the ins and outs of each character and how they play. 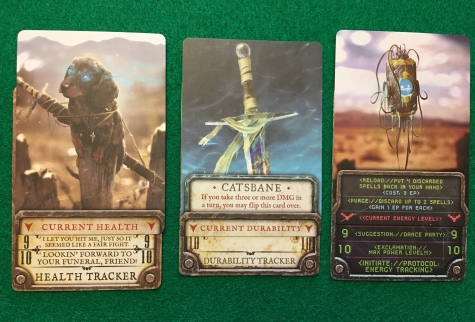 I have played through the entire first game, and have played through one path in the expansion.  Grimslingers is a game that I really like, when I am playing it.  The downfall for me, is the setup.  Once the game is set up and I am in it, I love it.  It’s just hard to get me there.  I love the map system, but it can be a pain to setup, especially in the later games where you are travelling through multiple maps at a time to get to your goal.  I created card covers to help distinguish the different landmarks on the board, it has made my life much easier.  I would love to see something like this offered, and illustrated by Stephen S. Gibson even as an add on pack  I would buy that up in a heartbeat!  The organization within the box itself is not conducive to cutting this time down at all.  Greenbrier Games does sell a collectors box that may help with this issue, but I cannot say for sure.  The cards are made of a different material than I am used to playing with, a matte finish.  This greatly reduces the glare when playing, which I love, but, it makes the first few shuffles difficult.  Once you have played a bit they seem to break in nicely.  I have not sleeved this game, and the cards have stood up to the wear and tear without a mark.  The story is well done, Grimslingers is something that I can see as a graphic novel one day.  It certainly lends itself to that thought for me every time I play.  The artwork on the cards is phenomenal.  I cannot say enough about the art, Stephen Gibson has gone above and beyond with what he has done here.  The characters seems to leap off of the cards with an ethereal feel like I have not seen in another game in a long time.  Each Grimslinger has a distinct personality and feeling, as do the little sidekick anima’s.  The characters are customizable through the achievement trackers and progress point allocations.

There is a lot to love about this game, the theme, the characters, the art (did I mention the art?), if you can overlook the little things that I mentioned above, you are in for a great experience.  I am excited that I had the opportunity to play through the base game again.  It was like reading a book that you enjoyed all over again.  I was happy to see the story in The Northern Territory continued right where the original story left off.  I love the different path options offered in The Northern Territory, all occurring concurrently, allowing you to hop between paths back and forth.  This allows for replayability as well as different experiences between players.  Stephen S. Gibson has made himself completely available for questions, comments, and even complaints.  He has been a tremendous support for this game, and I have had the pleasure of talking with him a few times about this game.  All around this is a game that I can, and have recommended.  I can’t wait to see what there is on the horizon for Grimslingers as well as for Stephen S. Gibson.

Want to hear more about my thoughts on Grimslimgers?  Jason from Every Night is Game Night and I interview Stephen S. Gibson on their podcast dropping on 8/3/17!

3 thoughts on “… Tame The Forgotten West”