Hello again everyone!  Last week’s post, which chronicled the epic battle between Ghillie and the tyrant Nom was pretty well received.  Enough so, that we have decided to continue the series.  If you missed last’s week and would like to catch up, you can do so here.  This week Ghillie is setting his sites on Mulmesh.  The journey will be long, treacherous, and fraught with hardship, but we are determined to see this through to the end.  Won’t you join us?

I mentioned this in our last write up, but it bears repeating, as I write this playthrough I am going to try my best to keep it as spoiler free as possible, as I start each new day I will tell you which card I pulled from the Encounter Deck, but will stay away from the story.  I will let you know if I chose the first or second option, without saying what they reference in the story.  Although I will try my best to avoid spoilers there may still be some, so read on at your own risk.  If you’re ready to go, so am I!

Day One, we join Ghillie as he is “Leaving Obendar”.  As usual we decide to take the first option.  We need Training Points (TP) badly, there’s really no other choice for us at this juncture. We use the 2 TP we earned to grab our first Defense die as well as #5 Multi-Arrow.  We also grab one Progress Point (PP), our journey is officially on it’s way!

Day Two, Ghillie is “Hardly Out of the Gate” when things begin to get real.  An attack, he chooses option two and gets ready to battle.  The Baddie Queue (BQ) is comprised of two 1 point Baddies, a Kobold Tracker and a Clay Golem.  Really bad luck to get a Golem right out of the gate, Break really has the ability to, well, break us.  Rolling a 6 on initiative will help Ghillie out of this, but it won’t be easy, why didn’t we take the first option?  The Golem is too far away from Ghillie to worry about for a bit, so we focus our attack on the Kobold, taking him out in the second round.  Now it’s just Ghillie and that Golem.  The Golem does not waste any time in breaking our attack dice.  We make sure we get some good damage from them before they go, however they are not enough.  The last few rounds see Ghillie running circles around the baddie, waiting for exhaustion to set in, which it finally does, in Round 7.  Ghillie escapes with 1 Health Point (HP), weary but victorious we gain 1 PP, a loot (Last Battle Stew, which we take 3 HP from right away) and 2 TP.  We take an additional HP as well as another attack dice from our TP.  Since we ate some delicious stew there is no need to rest and recover.  Instead we choose to Scout, revealing a 1 point baddie, Bog Pole.  No poison for me thank you, to the back of the line he goes!

On Day Three we decided need to be “Crossing the Sibron”, and option one is the way to go for us again.  This gets us even closer to Mulmesh, with 2 PP.  We also earn one TP which nets us #1 Rusted Spikes.

The fourth day of our journey we fall into “A Trap of Our Own Making”.  We are face to face with another tough battle.  The BQ is set by the encounter, giving us two 5 point Baddies to deal with, a Kobold Fanatic, and another Stone Golem!  Didn’t this guy learn?  Ghillie immediately seeds the field with his newly acquired Rusted Spikes.  Rolling a 5 on the ini die means we get first strike.  The encounter helps us in this battle, hitting each baddie for 1 true damage each time they move, including entering the battle.  Since both of our baddies are melee characters, this is something we play to our advantage from the start.  Our trap does it’s job costing the Golem 2 HP, making it that much easier to take him down by round three.  The Koold follows in round 5, and we are once again victorious.  This battle has cost Ghillie some health, but nothing some delicious stew cannot help him recoup.  We have earned 1 PP, a loot (Tattered Map) as well as 2 TP.  We use our training points to gain another dexterity and #15 Call Wolverine.  It’s time to meet Ghillie’s little friends!

Well fed and no longer alone on his journey Ghillie finds himself suddenly “Between a Rock and a Hard Place” on Day Five, choosing option two.  This encounter is one of my favorite, and it has the player taking control of a 20 point Golden Golem for the first three turns.  After turn three the Gearloc enters the battle, and the Golem turns on you.  The BQ to start this encounter was one 5 point Bog Lurk.  The Golem (me) does some serious damage to the Bog Lurk straightaway.  We allow the Bog Lurk to poison the Golem, hoping to whittle away his health, making him easier for us when we come into the fray.  The plan works well, the Bog Lurk falls quickly as Ghillie comes to the skirmish.  A round later the Golem also falls, making this one of the easier encounters that Ghillie has had thus far.  Ghillie gains 1 PP, a loot (Mechanical Assistance), a Trove Loot (2-3-3) and 2 TP.  This trove loot is pretty easy to get into, we pick that lock in our first attempt (maybe it’s all that Triplock we’ve been playing recently?) and we earn a Dex Infuser.  Ghillie chooses to add another pet to the fold, using one of this training points on #13 Call Falcon.  The second training point adds another HP. 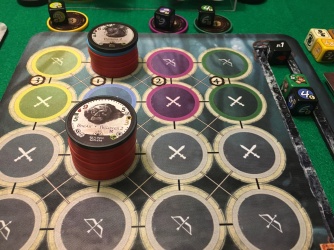 On the Sixth Day Ghillie chooses to “Trust Your Gut”, option two, and it turns out to be a bad decision.  The BQ is seeded with two 5 point baddies, as indiciated on the encounter card, a Dragon Delinquent and a Dire Wolf.  The combo of dragons and dire wolves is one that proves to be too much for Ghillie and his pets, they fall in the fourth round.  Here lies good ole Ghillie… 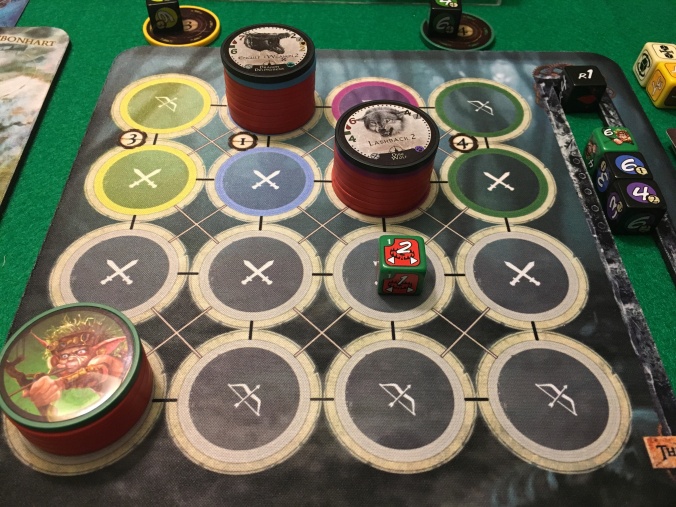 Lucky for us Ghillie has more lives than a werecat, he brushes off his defeat, squares his shoulders, and starts off again on Day Seven.  Using his Tattered Map he pulls two encounter cards, put the Tyrant Encounter card on the bottom of the deck, wondering if this was a good decision, or a “Risky Payoff”.  Choosing option two, he avoids a battle, but still gets 1 PP and 2 more TP, #2 Woven Snare, and #14 Call Tiger.  His menagerie is complete!

Feeling good, strong, confident, and surrounded by all manner of beast and bird, he decides to partake in a little “Midnight Warfare” on Day Eight, challenging Mulmesh!  Ghillie has learned, on this journey, to fight hard and fast, he decides to come at the Tyrant with everything he has, right off the bat.  He first lays a trap and his snare for Mulmesh.  The Tyrant complies by falling right into them both, losing 2 attack die, and 1 heath point before the battle even begins!  Ghillie uses his Mechanical Assistance to grab 3 more dex for this round, allowing him to roll, Growls, Lil Yeti, Talon, 1 defense, and 1 attack die, after moving 2 spaces!  Growls comes out on his 3/2 side, Yeti hides coming up bones, and going back to the mat, Talon comes out on his 1/1 side, the defense also comes up bones, and Ghillie gets 1 hit on his attack die.  Round 2 has Mulmesh rolling his Tyrant die and getting a Howl.  Ghillie responds with attacks by both of his pets on the mat.  He then uses his backup plan extension to get one more dex from the Dex Infuser to roll Yeti, 3 attack die, and 1 defense die.  This is all he needs to take the tyrant down for god, rolling Yeti on his 3/1 side, 3 hits on the attack die, and 1 shield on the defense die.  The tyrant is defeated and Ghillie is once again victorious. 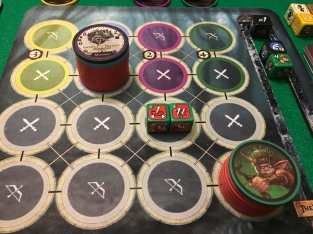 Last week we saw Ghillie take on Nom without the use of his pets.  This week, as promised they made their debut, making all the difference in my battle.  The match was pretty exciting, I was sure that Ghillie was doomed after he fell to the dragon and the wolf, but he really showed me what he was made of.  I’m really having a great time playing through these tyrants for you guys, and I appreciate each and every one of you that has taken the time to read this.  Please let me know what you think of the series so far, I’d love to hear from you.  Do you like the format?  Can I change something, do something better?  Do you want to see more detailed battles, such as including what I am rolling each round?  Or do you like it just the way it is?  Please let me know! 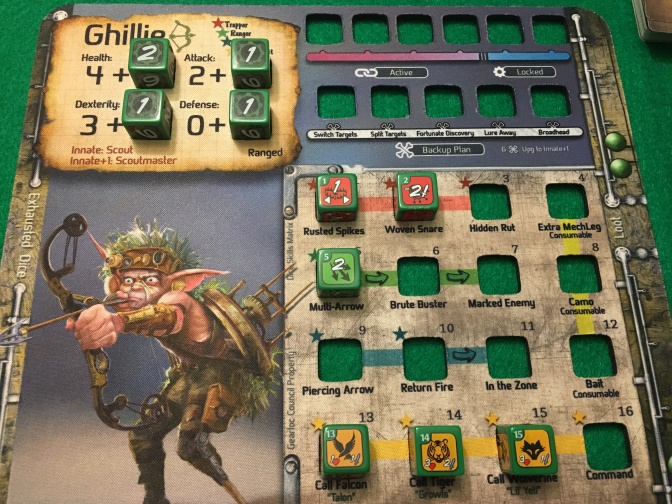 If you are enjoying my playthrough series and think that this game might be for you it is currently, as of this writing, in stock at Chip Theory Games.  Undertow should be coming in the next few weeks, but can also be preordered on their site.  I cannot recommend this game enough, Too Many Bones was ranked as my top solo game of all time in the Top 6 Solo Games article that I wrote for Meeple Mountain.  I hope that you are enjoying it as much as I am! 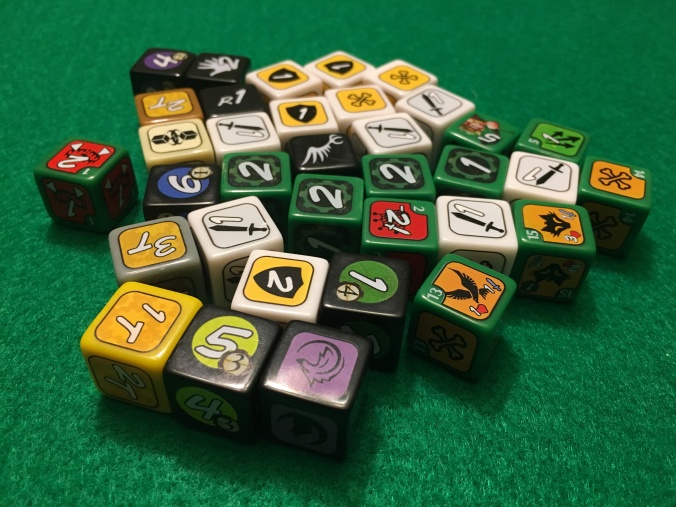 Our very first giveaway is now LIVE!  Please click this link to enter!