Recently, while on one of my numerous trips to Target, I found, in the dollar section, a Shopkins card game.  It was cheap, Emmy loves Shopkins, so I picked it up.  The game turned out to be a Shopkins themed version of Top Trumps.  I will admit that before playing this version, I had never heard of Top Trumps.  Apparently, this was a wildly popular kids game in the 70’s and 80’s in the UK.  Speaking with a few of my European friends confirmed this was indeed true.  After playing a few round rounds with Emmy we instantly saw the appeal.  Nice story, but what the heck does this have to do with anything?  Well, I’m getting to that!!

A few weeks back I received a copy of Pretending to Grownup by Jason Anarchy Games.  Normally I would not think that one of Jason’s games would be something that I would play with a 5 year old, but after reading the rules I realized that this was one that I definitely could!  Pretending to Grownup takes some of the same gameplay that Emmy liked in Top Trumps and gives it a new spin.  The box states the game is rated for 13 and up, but we all know Emmy by now, and that was not going to stop her.  Let’s talk about gameplay, and then we’ll get back to Emmy, her thoughts, and all that other stuff. 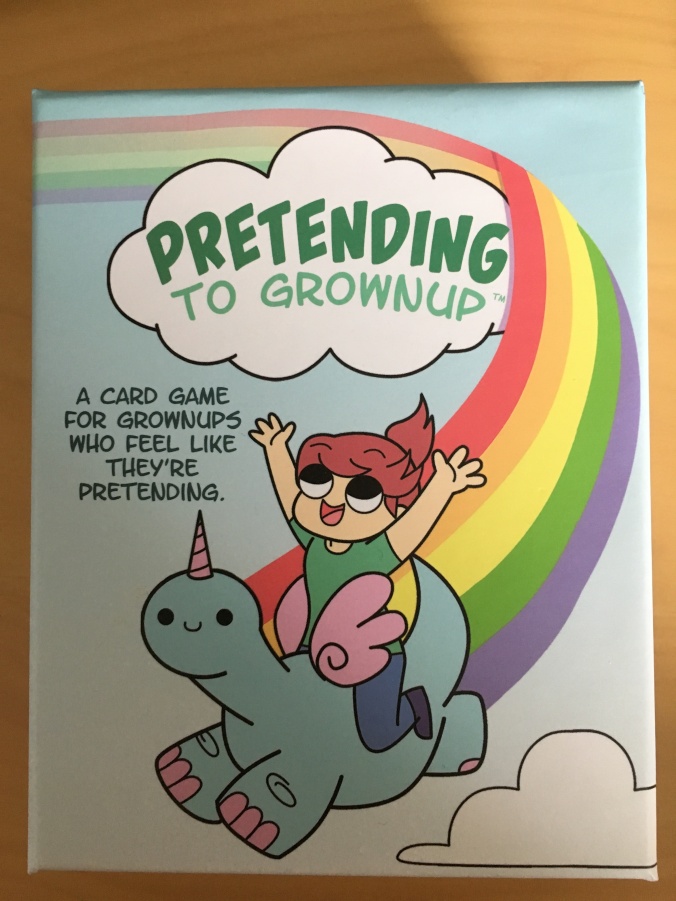 Pretending to Grownup is a card game in which players are attempting to prove that they are more grownup than their opponents.  The first player to collect 12 grownup points is crowned the winner.  Points are collected through playing cards from your hand and “squabbling” with your neighbor on the right.  To begin, each player is dealt 5 cards as their starting hand.  The remaining cards are placed in a draw pile in the center of the table along with the Daydream token, a cute wooden meeple of the phantasmagorical  “Unipegasaurus”, more on that later.  The rules state that they player who most recently complained about being tired goes first, so in our games, it was always me! 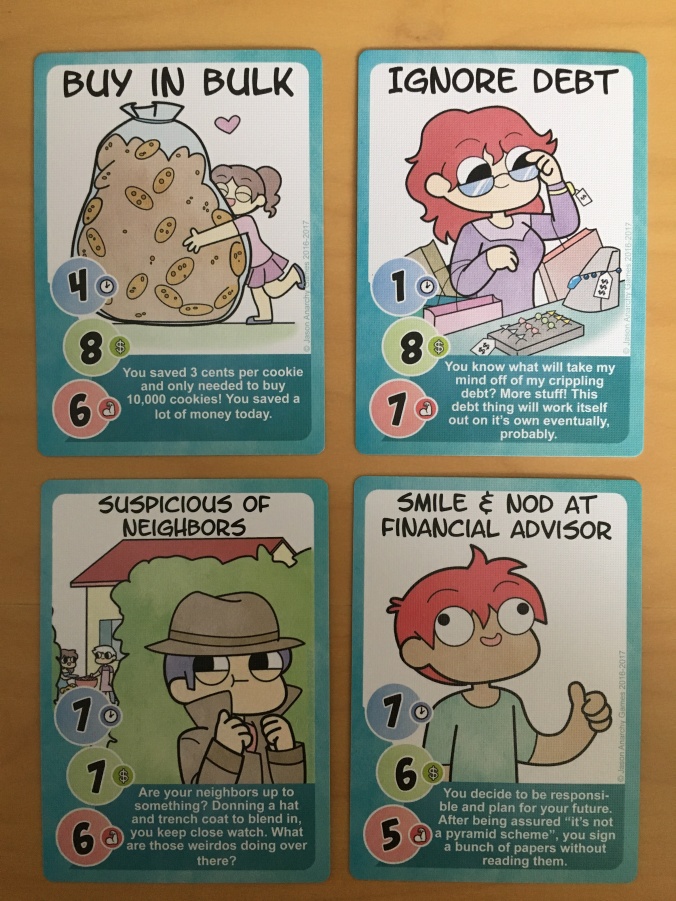 On your turn you may take one of three actions, you may squabble with your neighbor, take on more responsibilities, or you may daydream.  Squabbling is the primary way to earn grownup points, and is done by playing a card, from your hand, face down on the table in front of you.  You must then declare, to your neighbor, which resource you have more of than they do.  Resources are found on the lower left hand side of the cards, and come in three different types, time (a blue circle with a clock icon), money (a green circle with a dollar icon) or energy (a red circle with a bicep icon).  Each circle will contain different numbers, it is this numbered resource that you are pitting against your opponent.  The challenged player may choose to counter squabble by playing a card face down on the table.  The player to their right then has the option to also join in on the squabble.  Potentially every player at the table could join in on the squabble, as long as the previous has continued the chain.  Players may also chose to add Unipegasaurus cards to help alter their values.  Once all cards have been played they are all revealed simultaneously, the player with the highest value of the resource is declared the winner, and collects all played cards and points.  It is important to note that each card is counted as a single point, not as the value of the resources.  The challenged player, can instead, choose to ignore the problem, not playing a card, and conceding a point the original player. 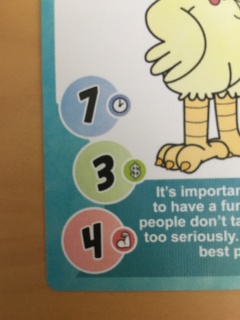 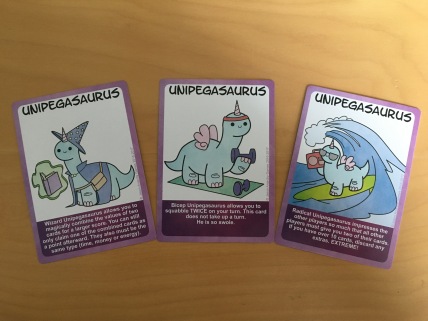 Instead of squabbling players may choose to take on more responsibilities, this simply means drawing two more cards from the draw pile.  If this would bring their hand total to more than 10, cards must be discarded until they have 10 or less.  Lastly, a player may choose to daydream.  Daydreaming allows a player to take the wooden Unipegasaurus from the center of the table.  If someone has already claimed the meeple, it can be taken from that player.  The meeple cannot be taken on two consecutive turns, if this happens it is returned to the center of the table.  While in possession of the Unipegasarus all resources a player uses gain a +1.  Play continues until one player has amassed 12 grownup points. 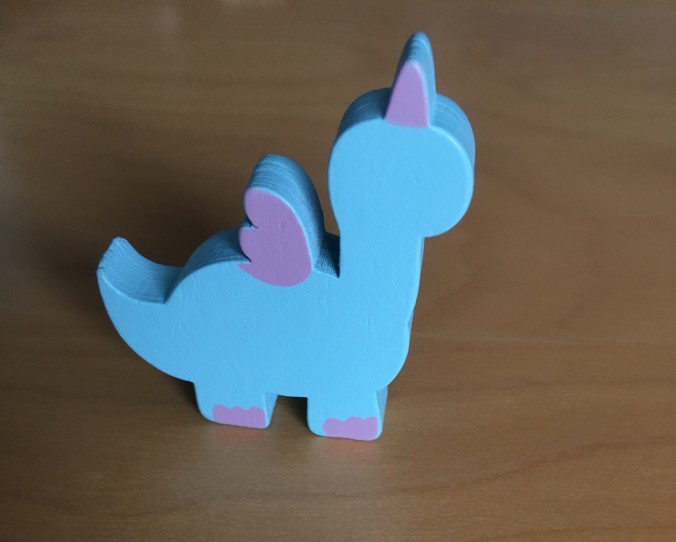 Pretending to Grownup is a very quick game, easy to learn, easy to follow, and lots of fun.  What keeps me coming back to this game, pure and simple, is the cards.  Until now I have not really touched upon the cards, but they are really the stars of this show.  Each card, and there are 100 in the base game, is completely unique.  The cards are beautifully illustrated by Megan McKay, who some of you may recoginze from her popular web comic Doodle for Food.  Each card depicts a grownup task, such as building a deck, or buying a new smart phone, each with accompanying flavor text.  The cards are a gem, in what was already a fun game.  This was all over Emmy’s head, but for me, was a constant source of amusement.  I looked forward to each card as it came into my hand.  They are so well done, and so thematic!  The copy that I received contained additional cards, with a red boarder, that was done by guests artists.  I instantly recognized many of them from my own Twitter feed, including Cyanide & Happiness, Fowl Language, The Awkward Yeti, and Lunarbaboon. 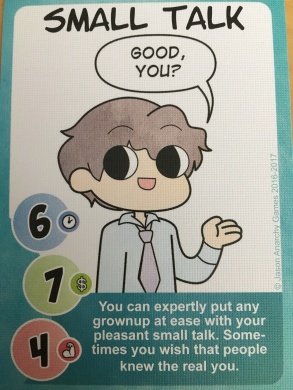 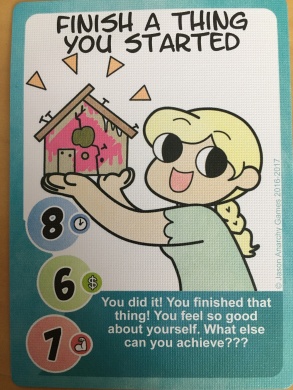 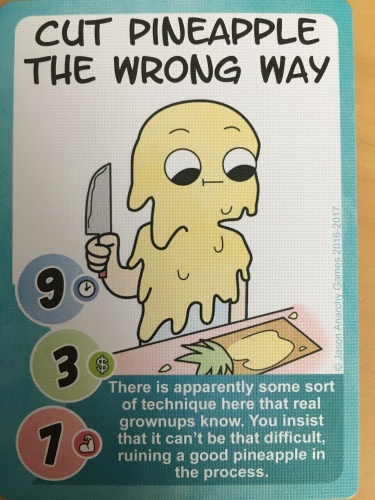 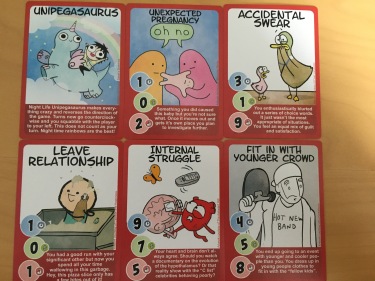 Playing this game with Emmy was a no brainer.  There was no questionable content involved to have to hide or explain.  I did have to explain why I found certain cards so amusing, and I did get the “my mom is crazy” look.  She loved the game, the illustrations made her laugh, and she could not get enough of the Unipegasarus.  The components stood up to playing with her, the meeple even survived some non-gameplay adventures afterwards as well.  I can wholeheartedly recommend this game to younger players.  It will get a grin out of the real grownups while the younger set wipes the floor with us.  Or maybe it’s just me, I dunno.

“Pretending to Grownup is like my Shopkins game, like Top Trumps rating, but full of laughter and fun.  You will really enjoy it, seriously, really enjoy it.  There’s a uni-creature, and you’ll seriously get some good stuff with the uni-creature.  Don’t play with 2 people!  Please play with 3!  Uhm, I don’t care who the 3 is, just make sure there’s 3.  Pretending to Grownup is a really great game, bye friends!”

Pretending to Grownup gets a solid:

Did you like what you read here?  Please follow us both here and on Twitter to receive the most up to date posting information as well as other related and unrelated posts!